Meredith Monk’s A Celebration Service Premieres in the Philippines

The Office of the Chancellor of the University of the Philippines (UP) Diliman and the UP College of Music, in cooperation with the Musical Arts and Research Management Foundation and the Philippine-American Educational Foundation, present a rare music ritual-concert of Meredith Monk’s A Celebration Service on Friday, 30 January 2015, 6:00 PM at the lobby of Quezon Hall (Central Administration Building of UP Diliman), Quezon City, following the flag retreat at 5PM. To be directed by Tom Bogdan of Bennington College in Vermont, USA, who is in Manila under the Fulbright Specialist Program, the work will be interpreted by the UP Madrigal Singers, UP Junior Music Education Guild, and the UP Dance Company, with Elders Ramon Acoymo and Daisy Valenciano and singers Mark Carpio, Camille Bianca Lopez, Riva Ferrer, Terrence, and Tom Virtucio. Allison Easter, another protege of Meredith Monk, will choreograph the show.

As a composer, Monk is considered an extraordinary visionary in the field contemporary art music in the USA today and the premiere of her piece in the Philippines is a momentous event for the UP College of Music, which is celebrating its 99th year. The performance also kicks off the Arts Month of UP Diliman campus.

A Celebration Service is a participative ritual performance that goes beyond passive listening and spectatorship for it fosters a profound musical contemplation on the human experience of connectedness and relationality with various Others in the world–with nature and with the Ineffable. Monk’s work is minimalist, abstract, open-ended, processual, transcendental in terms of time, simple but holistic, mysterious, and it illuminates relationships of presence that ritual is in essence. While songs in this piece are mostly made up of vocables, the mostly ancient texts–to be spoken by ritualist Elders–come from world spiritual traditions. For this performance in the University of the Philippines Diliman, these texts will be recited in Filipino, as translated by poet Pete Lacaba. 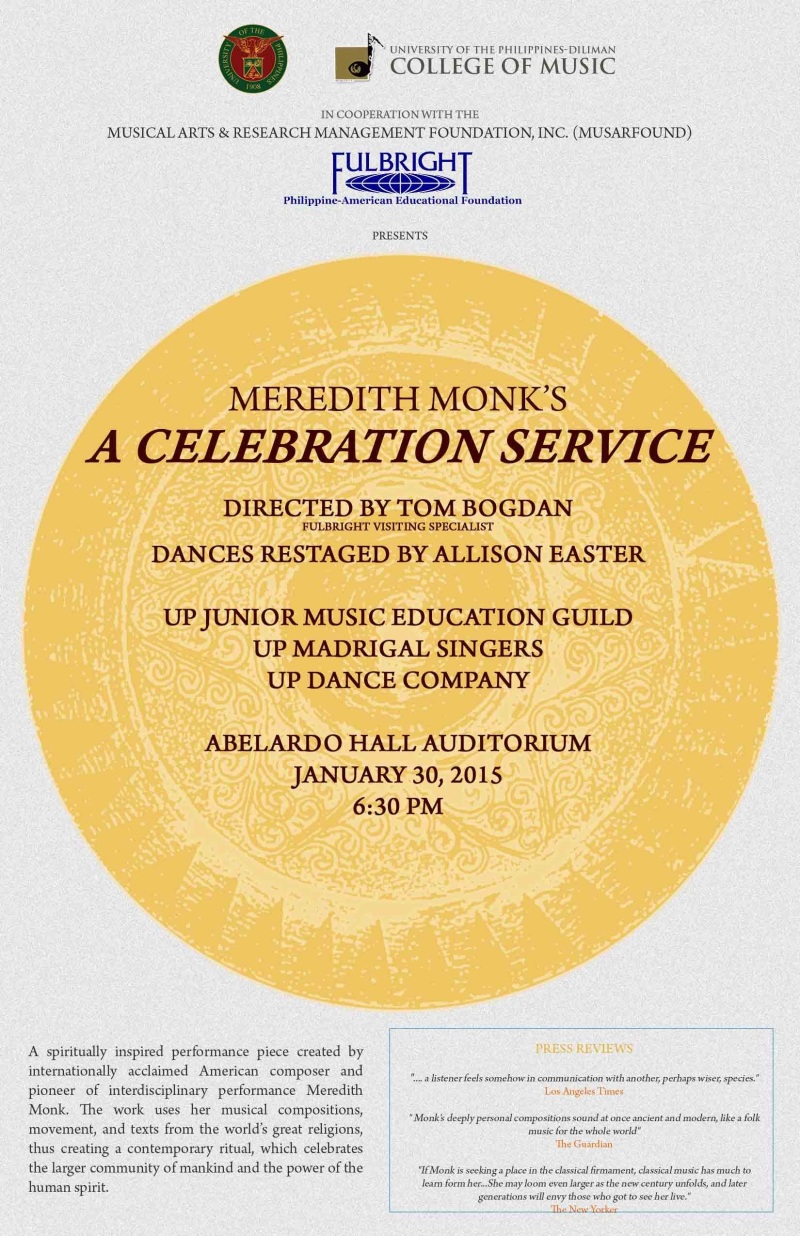